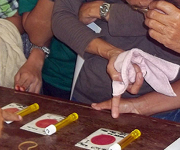 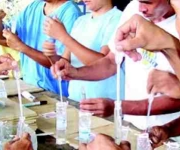 Two (2) staff from A Single Drop for Safe Water, Inc joined Oxfam and PDRRN team on a Rapid Assessment of damages brought by Typhoon Lawin (international name HAIMA) which ravaged the provinces of Cagayan, Apayao and Isabela starting midnight to early dawn of October 20, 2016. The team set out from manila on October 20, 2016 at 5:00 in the morning and reached Cauayan, Isabela at 5:00 in the afternoon.

Typhoon Lawin with a radius of 800 km and a maximum winds of up to 225 km/h and gustiness of up to 315 km/hr made landfall in Penablanca, Cagayan, devastating livelihood and property along its path. It is classified a super typhoon which affected almost all provinces of Luzon to as far south as Cavite and Batangas, including Metro Manila.

The team assessed the damages brought by the typhoon in the provinces of Isabela going through the municipalities of Delfin Albano and San Pablo. A team tried to assess the Sto. Tomas and Sta. Maria but was unable to due to damaged bridges rendering the towns inaccessible at this time. Other provinces assessed were Apayao in the municipalities of Conner and Kabugao, and the province of Cagayan assessing the city of Tuguegarao and the towns of Baggao and Lal-lo. It is apparent at the end of the 7-day assessment that affected provinces will need lots of assistance in livelihood and shelter. Water sources also needs development support to ensure safe water for the residents of the affected provinces.

The degree of devastation may be glimpsed in the following story:

Marites Cabag, a resident of Baggao, Cagayan shared her experience with Typhoon Lawin: When the typhoon came, it was around 12 midnight. The water rose and I knew we had to leave. My house was made of wood. My eldest son said he wanted to stay, but I said it was better for us to evacuate so we would be safe. We went to our neighbor on the other side of the street. The next day, we saw that our house was totally destroyed. All our appliances – our TV, refrigerator, electric fan – even our guitar, durabox, kitchenwares and clothes were scattered on the ground. I went in and picked up our clothes. Those were all we had. Our neighbors saw what happened and helped us build a makeshift house made from the wood from our old home. —(shared from Oxfam sa Pilipinas FB page)